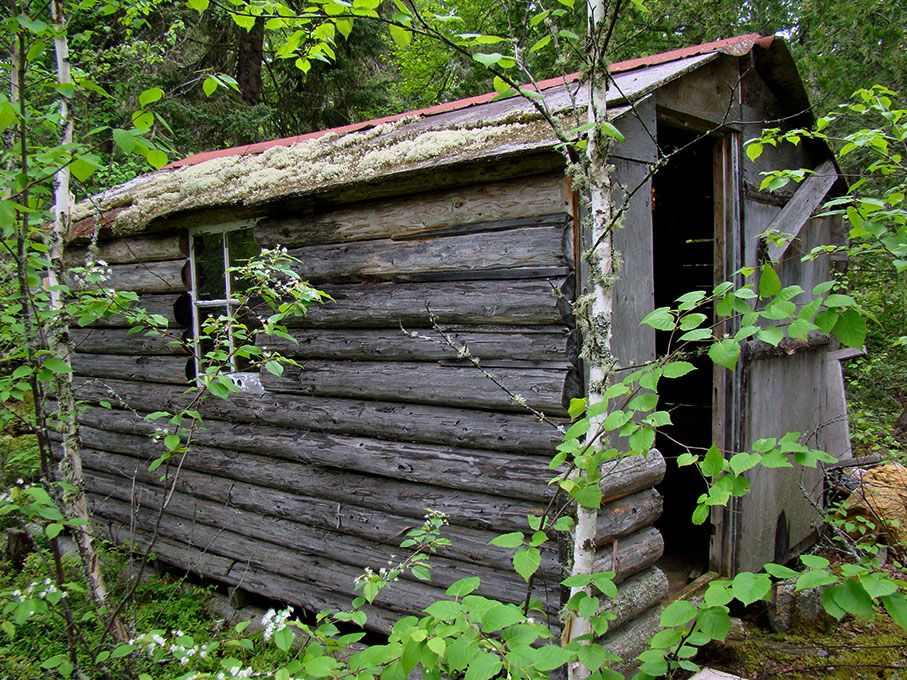 When Esnagami Lake Lodge in Northwestern Ontario changed hands a number of years ago, it came along with all the usual stuff, such as boats, motors, miscellaneous equipment, and one other unexpected and, as it turned out, critical asset - a very special guide by the name of Baptiste.

As close as anyone could figure he was likely in his late sixties at the time, but no one really knew for sure.

Baptist is an Ojibwa, and in some respects you could probably describe him as an "old time" Indian.

Not the stereotypical "old time" Indian that Hollywood usually portrayed as wearing elaborate costumes, hunting buffalo or swooping down on unsuspecting wagon trains, but a quiet, generous, thoughtful man who hunted, trapped and fished for a living. He had an ever-present smile and a calm, unflappable manner. As for his elaborate costumes, Baptiste could usually be seen wearing a T-shirt or flannel work shirt, a baggy old pair of jeans, and a rather large pair of work boots, with as many holes as there was boot. He also sported a faded old baseball style cap, except when he took guests Pike fishing that is, because then he would change over to his special Pike hat.

No one knew the lake better, or how to successfully fish it under any conditions than Baptiste. The reason Baptiste knew every rock, shoal, sunken weed bed and bay like the back of his hand, is because he has lived on the lake and in the surrounding area for his entire life. There is a small island located just across the bay from the lodge where, if you look carefully, you can still see a weathered wooden tent frame. This is where Baptiste and his family lived during the spring and summer months, long before the lodge was built. The new owner, knowing a good thing when he saw one, made sure that Baptiste remained on the payroll and thereafter spent as much time as possible with him, listening and learning.

During the winter months, Baptiste would work a trap line together with his family and others from the nearby reserve. If you look carefully, you can still see the remains of an old log cabin along the banks of the Esnagami River where the trappers once stayed when working their lines. Baptiste was not a big man, but as I mentioned he wore very large boots. Back in the 1930's, while out on the trap line, he had a bad accident with an axe, and did some serious damage to one of his feet. Being completely isolated, and with Baptiste unable to travel, the other trappers had little choice but to continue working their lines, telling him they would be back for him in two to three weeks. He managed to "doctor" himself to point where, when the trappers returned, he was able to travel back to the reserve. Because of the way it healed, from that time forward he had to wear a boot at least two sizes bigger than what he would normally have worn.

Baptiste was not just the best guide on the lake; he was also one hell of a fisherman. Long before the term "strike zone" made it into our angling vocabulary, Baptiste knew that if you wanted to catch fish, you had to put your lure in the right place, and use the right action and speed to trigger a strike.

When fishing for pike, Baptiste didn't use heavy tackle and toss around lures the size of small canoes - he had what can best be described as finesse. He was a master at working his little Crazy Crawler, or "pike killer" as he called it, over and through various weed beds, swimming it along and twitching it in such a way that the pike could not resist the urge to slam it. 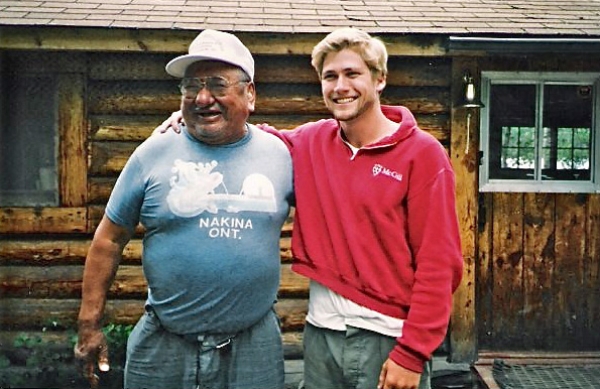 While knowing the lake as well as he did certainly had a lot to do with it, there was another equally important reason why he was so successful. There was a time when Baptiste had to rely on his skill as a fisherman to feed himself and his family. If we have a bad day, and don't come up with any fish, it's no big deal because we know that there will be a hot meal waiting for us back at the lodge. But if Baptiste had a bad day, his family might go hungry, and the prospect of an empty stomach can certainly hone your skills as an angler.

Each morning, the other guides would drag their fifty-pound tackle boxes down to the docks along with three or four different rod and reel combinations. Baptiste, who only owned one old rod and reel combo that I know of, would be holding a beat up plastic bag that contained a couple of well used twister tails and jig heads, a red and white Dare Devel, a Rapala, a Johnson Silver Minnow, a Heddon Crazy Crawler (otherwise known as his "pike killer") and a fillet knife in one hand, and in the other, he would be holding a thermos of coffee.

While waiting for their guests to show, the other guides would usually be engaged in a great deal of animated chatter about who they would be guiding, where to fish, the best place to have shore lunch and so on. Baptiste on the other hand, would stand quietly off by himself looking out over the lake and, from time to time if you watched him carefully, he might begin to scratch himself here and there - but more on that later.

The other guides soon came to realize that if you were having trouble finding fish - find Baptiste. Many a guide would surreptitiously try to follow him when he set out in the morning, but Baptiste had perfected the "run and gun" method of fishing and no one - and I mean no one - knew the lake better than he did. He knew within moments of arriving whether a particular spot held some fish, or if you were just wasting your time. If after a few minutes no one got a bite, without a word he would quickly reel up and take off, leaving his guests - and any other guides who may have been lurking within visual range - scrambling to get their lines into the boat. If that failed to shake them, then a couple of twists and turns around an island or two would do the trick.

The next time anyone would see him would be back at the dock just before supper, and you could usually hear his guests talking excitedly about having limited out and the great shore lunch they had. Back in the guide cabin, the animated chatter of that morning was replaced by low whispers and a general sense of disbelief and frustration over how Baptiste managed to do it - day in and day out - regardless of the conditions.

They would be shaking their heads and speculating about where he had disappeared to, even though most of the guides - while never willing to admit it - were frantically trying to find him. Those guides who made the effort to get to know him, and listen to what he had to say, found Baptiste, or the "Bapper," as some called him, to be very generous with his advice and, as a result, became much better guides and fishermen.

If you saw Baptiste on the dock in the morning wearing his hard hat, you knew he was taking his guests out for Pike.

The story behind the special hat, stemmed from an incident that took place while he was fishing pike with a couple of guests back in the late 1970s. One of the guests, who was fishing with a big "Pikie Minnow" - the type that has at least two sets of serious trebles - managed to imbed two of the trebles into Baptists' forehead during a cast. Baptiste pulled one of them out, but the other was in really deep, so they had to travel several miles to find the lodge owner, who was somewhere out on the lake with a couple of guests. Once they caught up with him, he managed to extract the remaining hooks with a rusty old pair of pliers. The following year those same guests returned, and presented Baptiste with a hard hat with his name painted across the front of it. From that day forward, Baptiste never went Pike fishing without his special hat.

While Baptiste was an exceptional fishing guide, he was also a rather remarkable weatherman. As far I know, Baptiste was not a qualified meteorologist nor did he have a dozen weather satellites or a Doppler radar system at his disposal - he simply had an uncanny ability to accurately predict the weather.

When he was out on the lake and said that it was time to go because a storm was on its way - even if the sun was shining at the time - you didn't ask, you just went, and about 90% of the time, the skies would open up shortly after your feet hit the dock. So how did he do it? When asked to share his secret, you fully expected to be told that he watched the signs given to him by the birds and animals - such as the number of one - legged squirrels he saw throughout the day - or about a certain type of magic that had been handed down by the Ojibwa elders for hundreds of years. Baptiste explained that if certain body parts (these remained a secret) began to itch, it meant bad weather was on the way. So if you saw Baptiste standing on the dock scratching away, it was always a good idea to stow your rain gear in the boat before heading out - just in case.

Baptiste was one of the last of what I would call a "real" fishing guide. Not someone who does it for a few summers so they can pick up a few bucks for school or whatever, but a man who had lived his entire life on the land, with the result that guiding simply became an extension of who he was, and how he lived.

Given his age and the overall state of his health, Baptiste had to give up guiding in 1994. I understand that Baptiste has now passed away, having lived into his 90's on the Aroland Reserve near Nakina, Ontario. 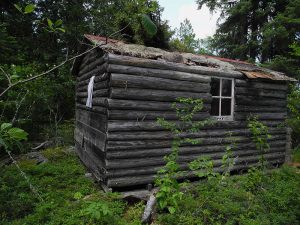 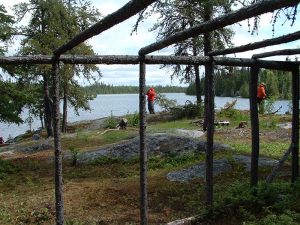 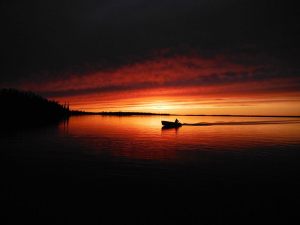 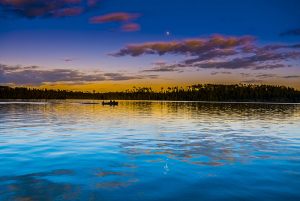 You can count yourself as being one of the lucky ones if you ever had the privilege of being guided and taught by a man who arguably, was the best there ever was - certainly in his part of the world anyway.

Look at a map of Esnagami Lake, and you will see a large island called the "Big Bapper." Someone wisely decided that it would be a fitting tribute to have Baptistes' name - or rather the one that he was best know by - permanently inscribed on the map of the lake that was such an important part of his life.

If you ever find yourself fishing in the vicinity of the "Big Bapper," and think you may have just seen a strange boat quickly disappear around a distant point - don't bother trying to follow it - no one ever could.

Tales From Cabin 14… and other exotic places 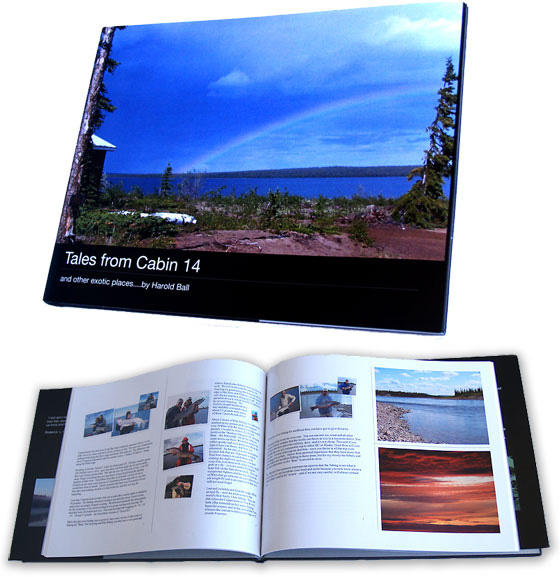