There is something very special about rivers.

They come in all shapes and sizes, and while we have managed to mess up quite a few of them, there are still an impressive number that, having been left to their own devices, continue to provide us with the opportunity to play at beingLesVoyageur as we travel along them to this day.

Unlike a lake, rivers can carry you places on their own accord, and the less imposing ones have a certain intimacy to them. 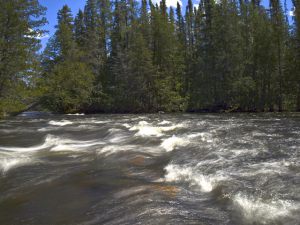 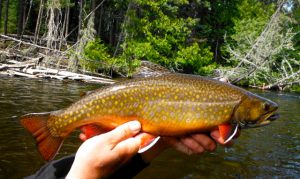 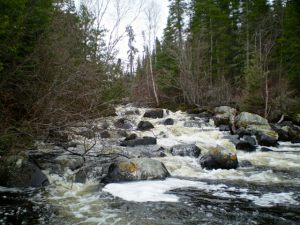 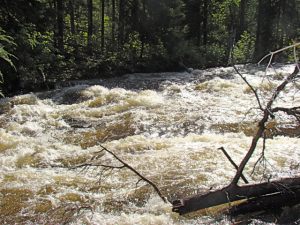 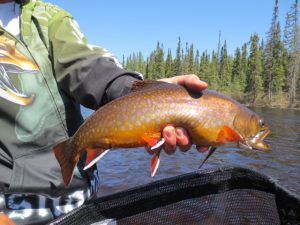 They constantly draw you forward by keeping you guessing about what might be around the next bend. Rivers can also challenge, frustrate and scare the hell out of you, particularly if you enjoy careening through white water rather than dragging yourself and your gear around it.

Without the rather remarkable system of rivers that provided the Indians, and early explorers with the means to push into the heart of the continent, we might still be crowded into the Atlantic Provinces or along the West coast, and while they are both great places to visit, I’m personally not all that fond of either codfish or rain.

When the idea for this story first came to mind, I came to realizethat over the years, I have fished quite a few rivers, including:

Although I had fished several sections of the Esnagami in the past, I was about to embark on a trip with Esnagami Lodge owner Eric Lund, and guide Mike McPherson, that was going to take me much further down stream than on any previous occasion.

The river, which flows out of the Northeast corner of Esnagami Lake, is approximately 40 miles long as the crow flies, and forms a relatively small part of a much larger system of rivers.

There seem to be walleye wherever you choose to drop a line, and while they tend to run somewhat smaller on average than those to be found in Esnagami lake, you’ll get your share of five plus pounders, and the numbers will wear you out.

You’ll catch them on the turns, in the quiet water adjacent to a swift or riffle, and in the pools just below, or alongside of the numerous sets of rapids you encounter while travelling along.

There is good pike fishing in both the fast water, and along the weed lines you come across where the river widens. Big, mean ones, who despite the seemingly endless supply of walleye and suckers to dine on, never pass up an opportunity to obliterate whatever offering you choose to toss their way.

While the pike and walleye fishing are exceptional, the "jewels" in the crown of the Esnagami River are the speckled trout.

These brilliantly coloured square tails sit just on the edge of, or in some cases, in a quiet spot right in the midst of the fast water. Once hooked, they invariably use the current to their advantage, which means that you are going to be in for one hell of a fight.

Rumor had it, they ran big, with five pound plus fish not being unusual, and while I’m not usually the skeptical type, I was going to have to see that to believe it.

Well, I’m now a true believer, because my first Esnagami River "spec," nudged just past the five-pound mark - but I am getting somewhat ahead of myself – so please join me as we travel down the Esnagami.

As we began to move down river, I decided to perch on the front seat of our boat, and was constantly looking forward and craning my neck, trying to see what was in store for us around the next bend.

About a mile down stream from the main lake, we encountered the first set of rapids. Under normal conditions, in late spring or early summer, even a rookie with a bit of boat experience and common sense can easily get through. There are lots of walleye for the taking, both above and below the fast water.

The next set is where you let the pros take over. While it’s not a long rapid, the water moves very quickly through the only navigable trough, which happens to be very tight to shore.

There was a time when you had to lay low when making the run, because a very sturdy, low overhanging branch had taken its toll on more than one guest, and even the occasional guide. At some point, someone decided they had enough, and managed to saw off the offending branch.

The next few sets are relatively easy to navigate, and the river is, for the most part, relatively narrow to the point where we made our first portage. It’s a beautiful stretch punctuated with clusters of wild irises, lilies and a seemingly infinite variety of other wild flowers that grow along the shore.

As we entered a small quiet bay, that looked very much like a dead end, I could distinctly hear the roar of the river, but other than a bit of fast water to the right of the portage landing, you would never have guessed that if you stayed right, it may very well have been you last trip.

Although the river was not visible as you walked along the trail, when emerging from the forest at the end of the portage, you found yourself at the base of one nasty, narrow rapid, that was covered in deadfalls, and littered with huge boulders.

The river widened somewhat below the rapid, and after switching over to a square stern canoe, other than keeping a watchful eye for the occasional boulder or sand bar we had a leisurely cruise to the next portage.

It was below this portage that the Esnagami really started to show its stuff.

The river began to take on a form of what I can best describe as "wilderness intimacy." It narrowed significantly as we snaked around a series of tight bends, with stretches punctuated by longer, gently sloping rapids, and a seemingly endless number of riffles and eddies.

When arriving at the head of a rapid, or in some cases the mid point, Eric would find a place to hold the canoe while we tossed flies, small spinners and spoons for the trout that were scattered throughout the rapid.

There were plenty of willing square tails whenever we stopped, and while my first fish turned out to be my biggest, I caught several more that gave the first one a run for its money.

After we had worked a particular area for a while, Eric would turn the canoe, and back us into the rapid, using our small outboard to hold us in place until he could line up the canoe in preparation for our run.

We ran some in a straight line, and moved through others in pinball like fashion, crisscrossing from bank to bank, until we reached the bottom of the rapid, where we then stopped to fish the pools and riffles.

While the fishing, and running various sets of rapids had been a great experience, the best was yet to come – because it was now time to confront the "chute."

The "chute" was a steep, 100-yard long cauldron of boiling white water. Huge boulders were strewn along its entire length, which, given the water levels, were either just slightly above, or below the surface.

As if these obstructions were not enough, Mother Nature had strategically placed a number of dead falls in various places throughout the "chute," just to make it all the more interesting for anyone dumb enough to attempt to run it.

Well, never let it be said that we were not dumb enough.

Our plan was to leave the second canoe that Mark had piloted down river below the "chute," and after spending some time looking things over, we decided that it would be fun to run the "chute," rather than just line the canoe down, like people who were not angling for a Darwin Award would have done.

Donning life jackets, and after going over what we were going to do in terms of paddling - or panicking - in the event Eric, who was our steersman, shouted certain commands during the run, we carefully moved to the brink of the abyss.

At the last moment, we decided that with three paddling, it might be more of a hindrance than help, so Mark handed me his waterproof video camera, and I took on the responsibility of recording for posterity what we all hoped would not be our last moments on Earth.

So off we went, and in about twenty seconds we arrived at the bottom with huge smiles, a thorough soaking, and a canoe full of water.

We fished a large pool at the base of the "chute" for a while, then walked back over a rough, overgrown portage and worked our way back up stream to Merkley Lake, where Eric had prearranged to have a floatplane waiting to take us back to the lodge.

This was a perfect day on so many different levels.

The weather,the world-class fishing -between the three of us we caught at least thirty trout, with a good portion of those being in the two to three pound range - the scenery, running white water, the plane ride back to the lodge, the company, and the opportunity to become more familiar with one of the finest rivers I have ever had the pleasure to fish.

Because the people you travel or fish with will, in many respects, define your entire experience, I want to finish off with a word about the individuals I travelled the river with on this particular day.

Every so often, you may have the good fortune to fish with people that you instinctively develop a rhythm with when out on the water.

You talk only when there is a need to say something that is not self evident, cast and retrieve in a natural sequence, so no one is competing for the same "perfect" spot or constantly casting over each others line, and you see and appreciate many of the same things without having to bring them to each other’s attention.

These are special moments that don’t come along all too often, so when if the opportunity arises, please take the time to enjoy them.